We were back in the indoor pool this week for another of LO’s swimming lessons after missing a session. I’d had a chat with him about how he was going to listen to the teacher and not keep disappearing underwater, so I was confident that he had taken no notice whatsoever. 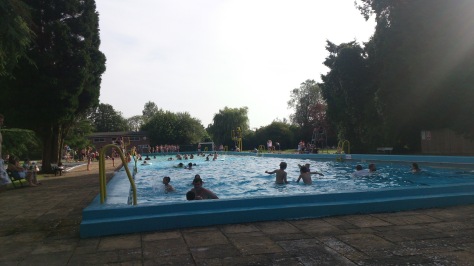 I was half right. He was slightly better than last time, but still continued to bob up and down disappearing underwater and then reappearing while smoothing out his hair. He looked a bit like a blind person at a disco – thoroughly enjoying himself, grinning like a a Cheshire cat and bouncing up and down, but completely out of sync with everyone else.

The teacher told him off three times and after the second, he asked if he could get out of the pool. He came to me and said: “Look mummy, I’m swimming!” before returning to the pool. No sooner had he got in and disappeared underwater than he was told off again. I made the international sign for “listen for God’s sake!” and he shouted “but I love you mummy!” across the pool much to the amusement of the watching crowd.

He did impress me with his improving backstroke and kicking, plus the ability to disappear underwater and retrieve various items from the bottom, most of them deliberately placed there.  I decided to make our next stop the hairdressers to see if that helps with the need to disappear under the water every two seconds. We shall see.