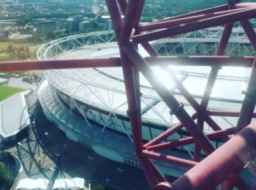 “It’s not scary”, said the woman who helped me get into the mat/sleeping bag as the woman in front of me shrieked her way down.

To mark another successful journey around the sun (in other words, my birthday) I thought I’d celebrate by having a go on the world’s biggest slide at the Arcelor Mittal Orbit at London’s Olympic Park. Having worked on a project that meant I saw the slide being built had whetted my appetite and was also strangely reassuring when it came to the safety and solidity aspect!

So the day of the slide came and I turned up at Stratford East station, realising that for some reason I was wearing a skirt. I tried to nip into one of the clothes shops to get some trousers, but either everyone had the same problem as me, or it was a standard Saturday and it was crazily busy.

Time was ticking by and I now needed to run to the tower to get to my turn at 5pm. You have your bags searched, naturally, and then the receptionist explains that you can put your stuff in a locker and go straight up, or you can get the lift to the top floor, have a look round and then come back down before heading back up again. Makes sense? 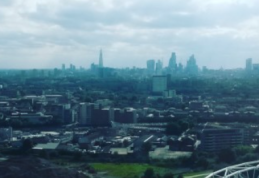 I recommend that you do have a look at the top, with phone in hand, as the views extend about 20 miles and you get a good view of Canary Wharf, central London and of the aquatics centre and Olympic stadium.  You can also see people begin their descent – either by slide or abseil! 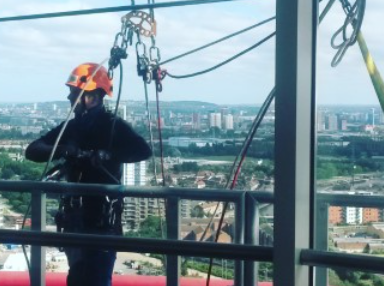 You then queue up and there’s an expectant chatter while you wait, punctuated every minute or so by someone screaming their way down the slide.  It’s pretty much how I imagine a labour ward to be.

You get a helmet (Not sure you need one of these on a labour ward)  which will make you look like Ron Weasley off to play Quidditch, plus arm protectors if you are so absorbed with forgetting to wear trousers that you forget to wear long sleeves. (I might need help with getting dressed).

You inch to the top of the slide, and there’s a screen showing happy people emerge at the bottom of the chute (I said it was like a labour ward, didn’t I?). But for now, you have to prepare yourself for the descent. You get into what looks like the tray leading up to the airport luggage scanner where the staff unfurl a mat that has a pocket for your feet. You grab the handles, scooch into position and then get pushed! 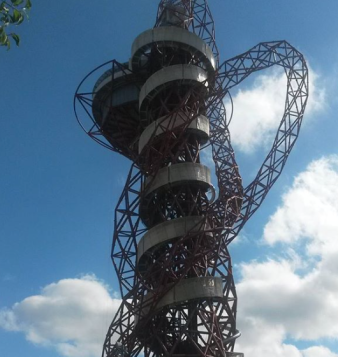 I congratulated myself on not screaming, but the speed is immense and as I whizzed and careered round corners in and out of the dark, I did let out some involuntary squeals. It’s over in just 34 seconds, but it’s such an adrenaline ride. I’ll be back soon, but sadly for a very excited small son, you need to be 8 years old to ride.