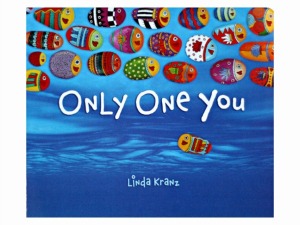 The school had a lovely idea for celebrating every child’s individuality…and it really demonstrated that this is not an area that small son needs to worry about.

The idea was that every parent and child would paint a fish together and the finished work would form part of a mosaic. I traipsed to school in the rain and was greeted at the door by a friendly boy who knew which child to fetch and returned with an impatient small son.

We got to work with a pebble, some paint, a paintbrush and small son completed the mission with two brushstrokes.

“Done”, he said and got up to return to the classroom.

“Hang on,” I said, doing my best to sound positive while the parents and children around me worked together harmoniously. People had their heads together in partnership, carefully choosing paint and designing fish.  I could barely make small son sit down. 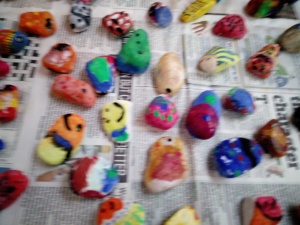 “That is not a fish”, I tried to say.  There was literally an artist next to us. A woman who makes a living doing this.  Hers had a face and fins. Ours didn’t. “It looks like a tie dye t-shirt.” she said, trying to be generous.

“But we were watching a film. A Disney film,” protested small son. He ran off, leaving me to sit alone. I think the head teacher felt sorry for me and she said I could take him home if I wanted.

He had football, so I thought I’d continue to mooch around.  One of the other mums asked me where I’d found the paper towel.  It had vanished.

“Perhaps there’s some more in the bathroom?” I suggested.

“I can’t possibly go in there!”, she looked horrified, so I went in for her to fetch it before deciding that I might as well as well get small son ready for football. This task usually takes ages, but is completed in minutes today. More waiting.

Small son scores into the wrong goal. There’s ‘only one you’ I think to myself.