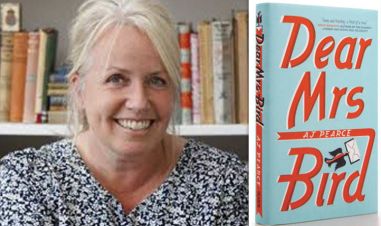 Author AJ Pearce might have inadvertently invited the audience of her talk at Hungerford Town Hall to be extras when the time comes for her novel to be made into a television series.

And that wasn’t the only bit of good news for the mostly female audience that gathered for her chat with Hungerford Bookshop owner Emma Milne-White about her first novel Dear Mrs Bird. Fans of the book will be delighted to hear that a sequel is on its way.

The original book was inspired when AJ Pearce started collecting wartime magazines and found herself compelled by the advice columns. Letters from the era give an incredible insight into the worries faced by the women on the home front, ranging from queries on rations to terrible wartime losses of loved ones.

Not only that, but they reflect the remarkable Blitz spirit of the times – there’s no moaning or self-pity, but a determination to Get On With It.

Dear Mrs Bird embodies this with a story about a young would-be war journalist Emmeline Lake who accidentally lands a job on an ailing women’s magazine. Rather than writing about political intrigue or the war cabinet, she finds herself weeding out any ‘Unpleasantness’ among the letters to the magazine’s resident agony aunt Mrs Bird. Unable to turn her back on the pleas for help, she decides to secretly write back.

The book is so upbeat and positive that it was interesting to hear how true-to-life it was thanks to the author’s research. Thanks to interviewer Emma’s enthusiasm for the subject, the audience heard about the writing and research process which included conversations with real women who had served in the Auxiliary Fire Service (AFS) and the collection of wartime photo albums that the author found in eBay and junk shops. Unloved photos were brought back to life as the inspiration for the characters, including Mrs Bird who was a particular source of interest from the audience.

This prompted Pearce to read out a real letter from an advice column from 1903 –  a beautiful, earnest letter written by a 10-year-old which was met with a strange and heartless response from an Edwardian agony aunt.

This was a lovely talk on the power of positivity and the reality of living through a world war, but most importantly, to the power of friendship.

(appeared first in the NWN)